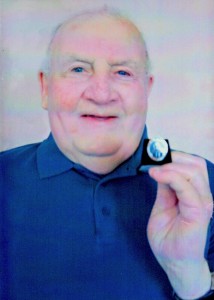 When he recorded his two songs, Willie Hutchison  – known as Willie a’ Tip – was a fisherman living in Brough and brother-in-law to Willie Hutchison of Creadieknowe.  He had been conscripted as a Bevin Boy to work in a mine in Fife during and immediately after World War II. He was a keen and able footballer but he also had a lively interest in songs, making his own manuscript collection.    Willie died in 2009 shortly after he celebrated his diamond wedding anniversary with his wife Kitty. The photo shows him proudly  holding his Bevin Boys ‘Veterans badge’  which he received from the then Prime Minister, Gordon Brown, a year before his death.  We regret not having had the chance to record more of his fine singing.

THIS IS A CALL TO ACTION AREA